Keith Roush – Secretary/Treasurer of the Board

Keith Roush attended Montana State University in Bozeman 1967-1970, studying electrical engineering, film production and snow. Working in the mountaineering and ski business since 1971, he has climbed, skied and guided on three continents. He worked with Royal Robbins guiding in the San Juans since 1976 and developed the first Telemark ski boots with Galibier in France. 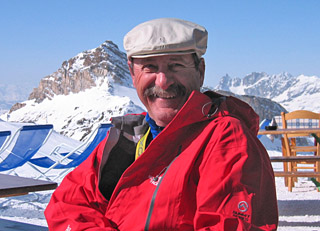 Moving to Durango in 1983, he has continued to ski the San Juan backcountry up to 90 days a year. Since 2002 he has been the proprietor of Pine Needle Mountaineering in Durango . He was President of the Board of the Western Winter Sports Representatives Association, board member of the San Juan Mountains Association, Silverton Avalanche School instructor since 1984 and member of the La Plata County Search & Rescue Management Team since 1983.

He also maintains a house in Silverton and skis and hikes every chance he gets in the San Juans, while still sticking his head into the snow on a regular basis.