(See Archival Data for past season’s datasets and metadata) 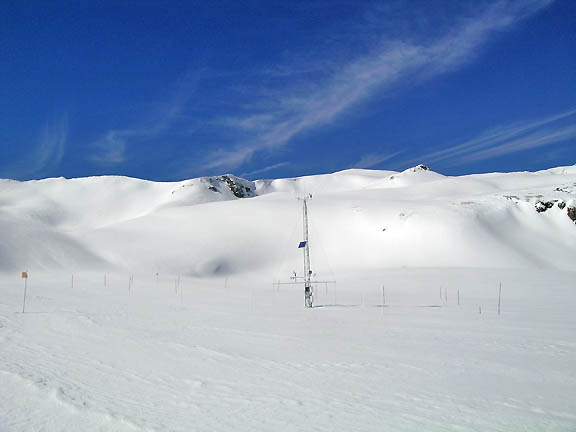 Senator Beck Study Plot (SBSP) is located at a level site near the center of the Senator Beck Basin Study Area at 12,186’ (3714m), above treeline and in the alpine tundra. The SBSP consists of a single 10 meter tower, with an extensive array of instrumentation, and an adjoining 12m x 36m snow profile plot. Signage advises the general public to avoid approaching the mast or entering the snow profile plot and cooperation has been excellent. Data is acquired via RF link.

This very exposed location is subject to the full force of the alpine winds inside the Basin and, as such, measurements of wind speed and direction are reasonably representative of wind-effected snowcover formation and other processes within the Basin. Because of these dominant wind effects, SBSP is a poor location for measuring precipitation – a very large portion of snowfall would simply blow over the top of the precipitation collector – and no precipitation measurements are made. Measurements of snowpack depth at SBSP are understood to be simply ‘point’ measurements that cannot be reliably extrapolated any distance to estimate snow depth in the surrounding alpine terrain; these measurements are meaningful only as a time series of snow depth at that point. Because the site sits on a level bench near the middle of the Senator Beck Basin watershed, air temperature and humidity data from SBSP are minimally affected by the surrounding terrain and often present a smaller diurnal range than at the Swamp Angel Study Plot. The terrain horizon to the east, south, and west is sufficiently low and open to enable meaningful measurements of incoming solar radiation and of outgoing long wave radiation emitted from the snowpack surface.

Wind speed and direction are measured at SBSP at the top of the 30’ tower, minimizing the influence of the immediate terrain. Snowpack depth, also referred to as height-of-snow (HS), is measured, in meters, at the end of each hour by an ultrasonic distance sensor designed for monitoring HS. Air temperature (Celsius) and relative humidity (percent) are measured every five seconds at a fixed height on the tower. Incoming short- and long-wave radiation values are measured, in watts per square meter, every five seconds by individual sensors at the top of the tower. 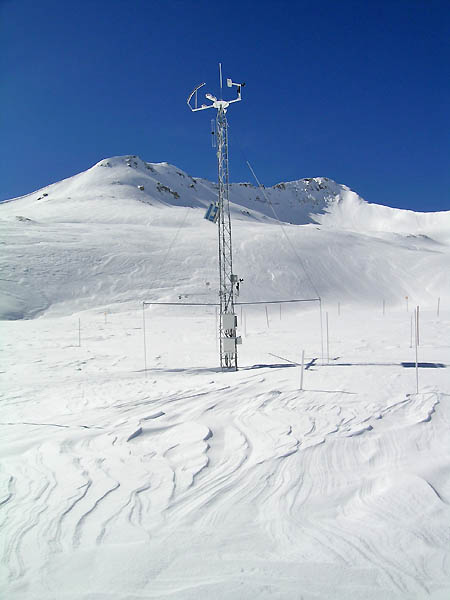 A proxy for long-wave radiation emitted from the snowpack surface is monitored by measuring the snowpack surface temperature (Celsius) every five seconds using a sophisticated infrared temperature sensor specifically designed for snow measurements. All these five-second measurements are averaged each hour to generate 1-hour data, and again once every 24 hours, at midnight, to generate 24-hour ‘summary’ data. Times reported are in Mountain Standard Time; we do not utilize daylight savings time.

SBSP is, by choice, an exposed alpine site subject to winds of up to 90+ mph (40+ m/s). Wind effects are often present on the snow surface surrounding the mast. Trico Peak (13,321′, 4,060m) is seen in the background, looking west. The single 40 watt photovoltaic panel seen at mid-mast charges a 400 amp-hour battery bank contained in a sub-snow-surface enclosure located some 10 meters from the mast.

Horizontal ‘stiff arms’ extending from the mast enable the transition from angled to vertical guywires to the ground anchors, thereby eliminating nearly all snow settlement stresses on the mast’s guywires yet still providing a stable mast in high winds.

A hexagonal array of vertical, 3m (9.8′) ‘height-of-snow’ (HS) measurement stakes is deployed around and 7.5m (24.6′) from the mast to enable calculation of snow surface slope and aspect, improving the interpretation of reflected radiation being measured by the down-looking pyranometers. These HS stakes are read using binoculars, leaving the snow undisturbed.

At the top of the SBSP mast are deployed a wind monitor (RM Young™ Model 05103-5), two up-looking, full-range pyranometers (Kipp & Zonen CM21, 305-2800 nm (50% points)), a third filtered pyranometer (Kipp & Zonen™ CM21 with RG695 filter dome, 780-2800 nm (50% points)), and a pyrgeometer (Kipp & Zonen™ CG4). One of the full-range up-looking pyranometers is deployed with a fixed shadow band for measurements of diffuse radiation at solar noon. The shadow post is modeled upon the Swiss’s Alpine Surface Radiation Budget project specifications. Air temperature and humidity are monitored just below the level of the radiation sensors (Campbell Scientific™ CS500). 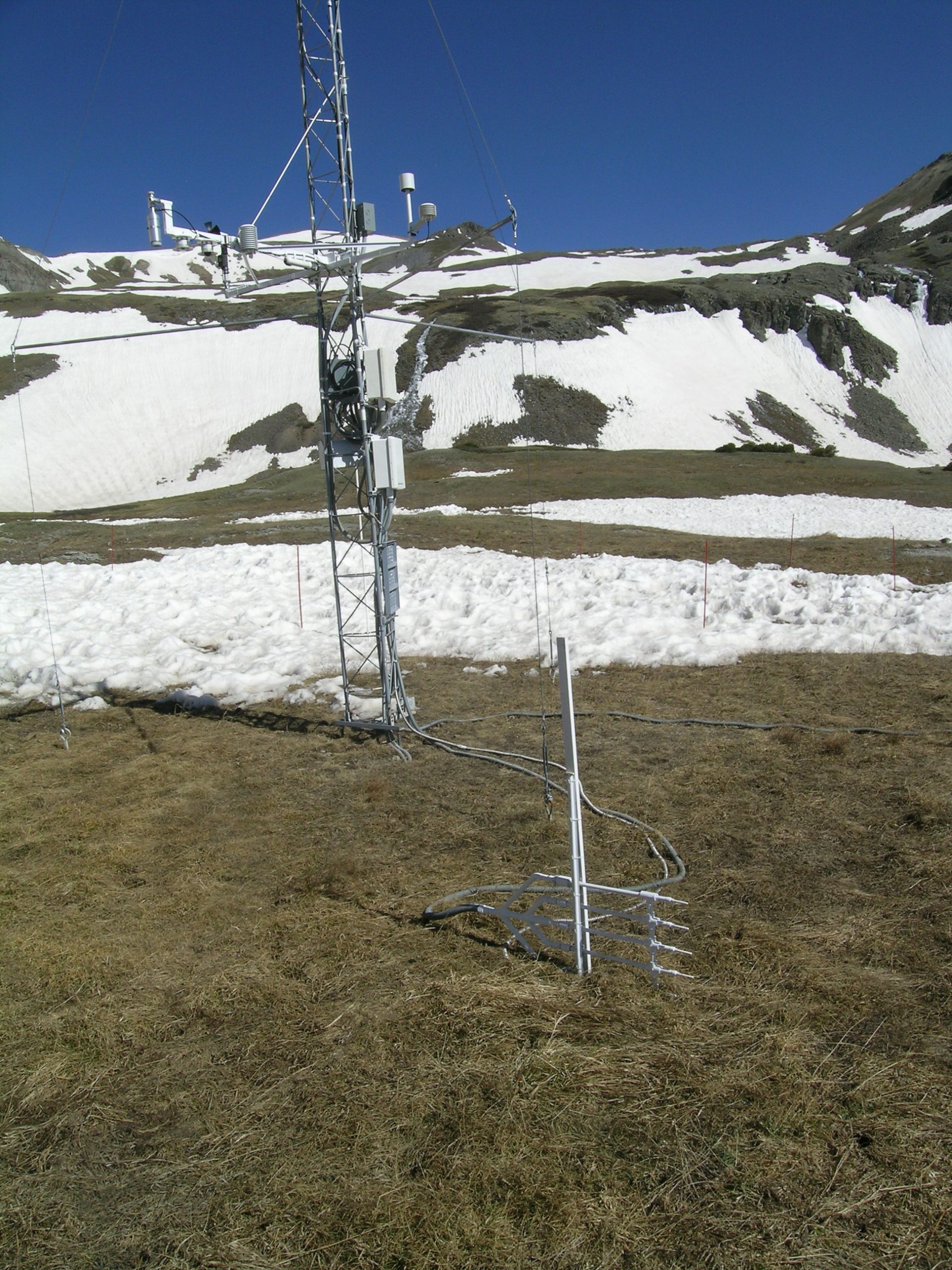 A view of the lower end of the mast looking up the south side of the mast shows the system’s Campbell Scientific™ CR10x dataloggers (two) enclosure (white cabinet) located at 9.5′ (2.9m) above the ground; a separate multiplexer enclosure is located just below the dataloggers, out of view.   On the arm extending due south from the mast are mounted an ultrasonic snow depth sensor (Campbell Scientific™ SR50),  two down-looking pyranometers measuring reflected radiation from the snow surface (a Kipp & Zonen CM21, 305-2800 nm (50% points) and a Kipp & Zonen™ CM21 with RG695 filter dome, 780-2800 nm (50% points)) and an infra-red snow surface temperature sensor (AlpuG GmbH™ SnowSurf) Another arm extending east and west from the mast houses, to the east, an air temperature and humidity sensor (Campbell Scientific™ CS500) and, to the west,  a second wind monitor (RM Young™ Model 05103-5). 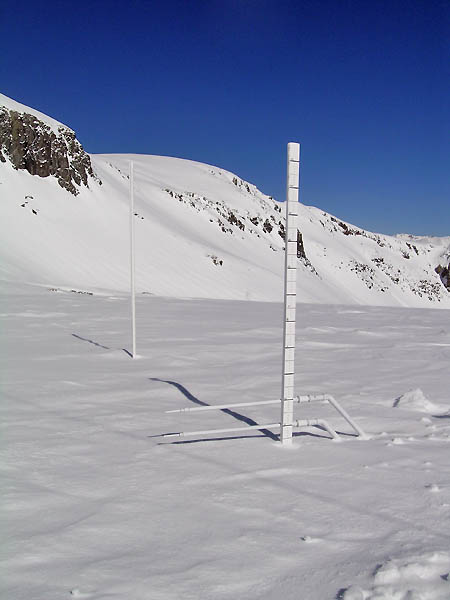 A snow temperature sensor array is deployed near the mast, with instrument leads housed in flexible steel conduit. The array consists of five Campbell Scientific™ 107 probes in a five-pronged, horizontal ‘fork’ array, with 10 cm of vertical spacing between sensors. The upper two sensors are visible in this photograph, and the remaining three sensors are beneath the snow surface. The array can be located at any desired level in the snowpack and re-positioned as the snowpack evolves. A wooden stake indicates depth to the center sensor in the array. 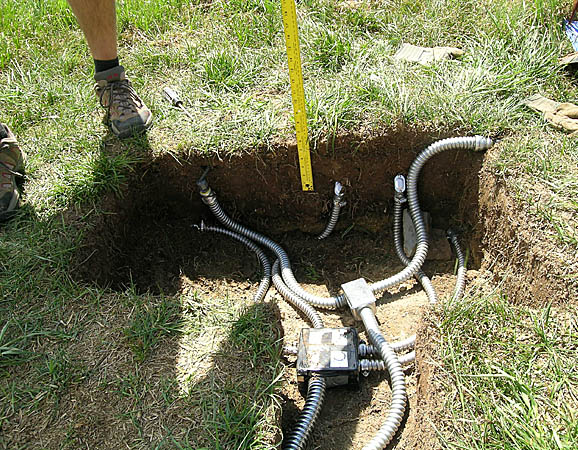