The string of storm systems that started here in the North San Juans on Friday and ended Sunday have come to pass bringing a total of 0.7” precipitation to Swamp Angel at Red Mt Pass.  The observed values collected by the precipitation bucket are verified by the 6.4” measured snow accumulation.  Storm #9, being the snow that fell Saturday into Sunday brought only 0.47” precipitation, the minimum amount to be considered a storm.  Even though the last few days did not bring a huge amount of snow to the Red Mountain area it was still a welcome boost to most areas of the San Juan Mountains and Colorado mountains in general.  SNOTEL plots for most basins show a nice bump upwards with increases of SWE over the last 10 days around 1.5”-2”; Yampa saw a 2.1” gain, Animas 1.8”, Gunnison 1.5”, Colorado mainstem 1.5”, Rio Grande 1”, and Colorado as a whole saw a 1.5” gain.

Luckily there is still more to come in the forecast.  In the North San Juan there is a winter advisory with heavy snow expected tonight thru tomorrow.  This system looks to benefit all of Colorado but it appears the Southern and Northern Basins the most. 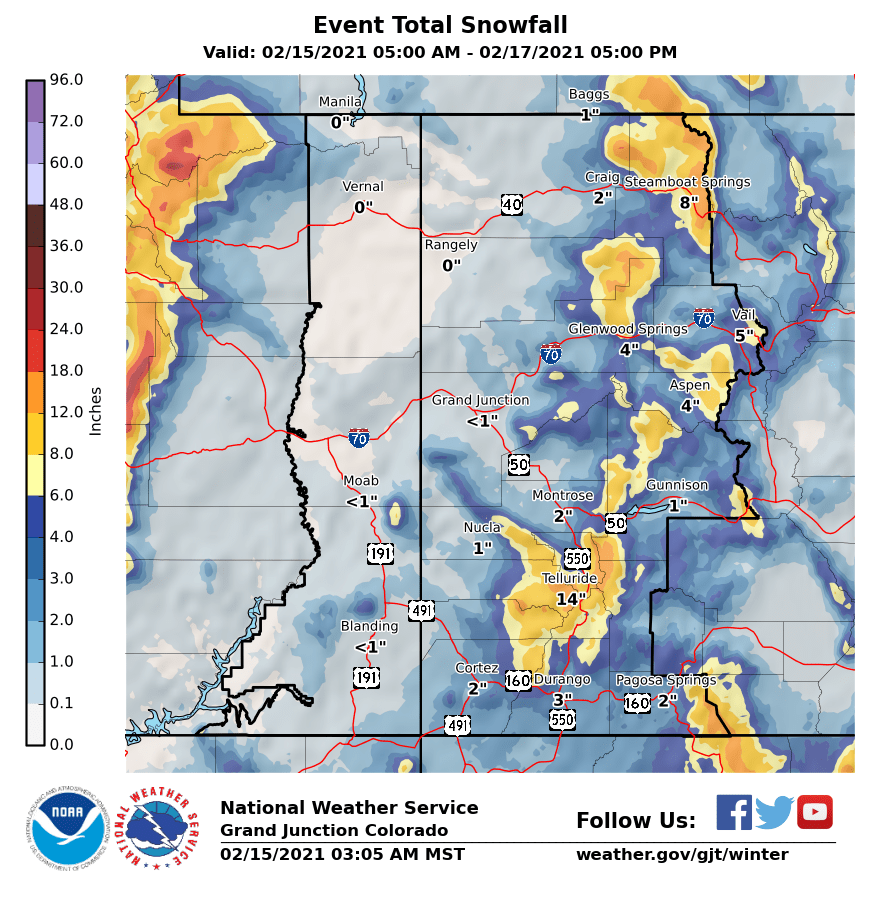 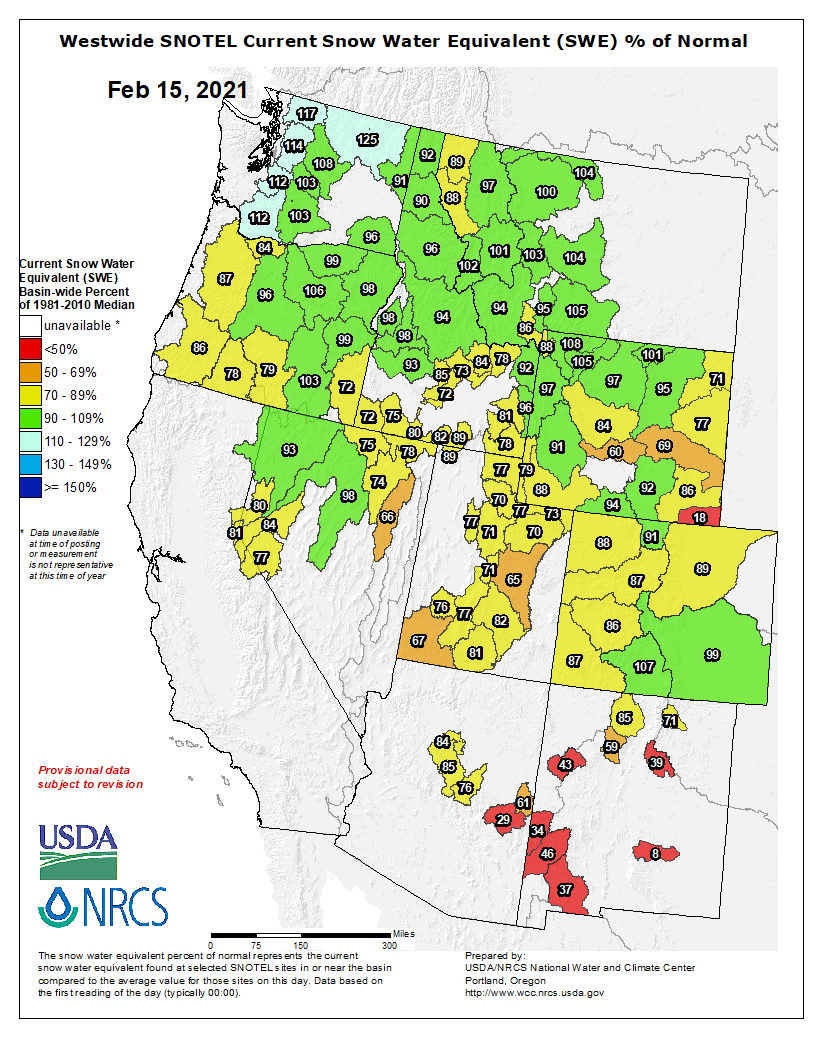 Wind gusts predominantly in the 40’s out of the south ushered in storm #8 that started Friday early morning and ended Saturday afternoon.  The majority of the snow however fell Friday late afternoon and ended Saturday morning.  Air temperatures stayed chilly but Saturday was sunny and clear making for highway 550 being melted off by mid-morning and the new snow making good snowballs by noon. The Southern San Juan Mountains appears to have accumulated the most from this system with a solid foot in some locations.

The forecast is encouraging with the next storm arriving Wednesday morning.  Weather models are still thinking this system over, but wherever this system choses to land it looks to contain a good amount of moisture. 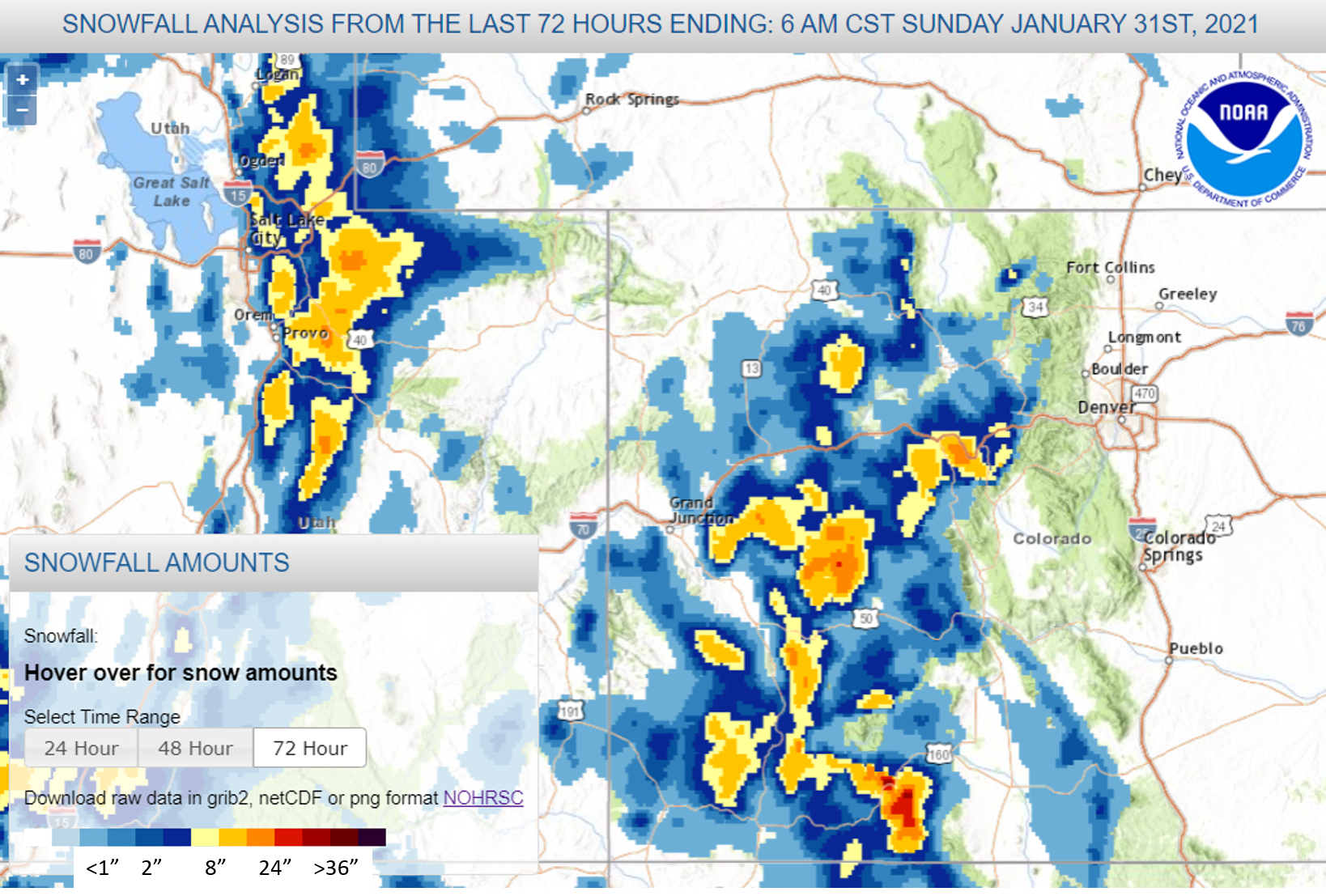 As of this writing on Tuesday afternoon the latest system comprising of Storm #7 is working its way through the Colorado Mountains depositing light to moderate snow in southwest Colorado and weakening as it heads north.  The system will be mostly out of the area by this evening.  Storm #6 and #7 both came up from the Four Corners region thus benefited the southern basins and not so much the central and northern basins.

All told, it has been a productive last few days.  We observed 1.9” of precipitation as 1.2’ snow accumulation Swamp Angel.  Winds were pretty high on occasion over the last 4 days with gusts reaching 53 mph on Friday and 46 mph on Saturday, so a lot of wind redistribution of snow especially at higher elevations as seen in the fluctuating snow depth at the Senator Beck station.

The next system we are eyeballing looks to arrive Friday evening and as of right now appears will deliver 3-8” depending on location. 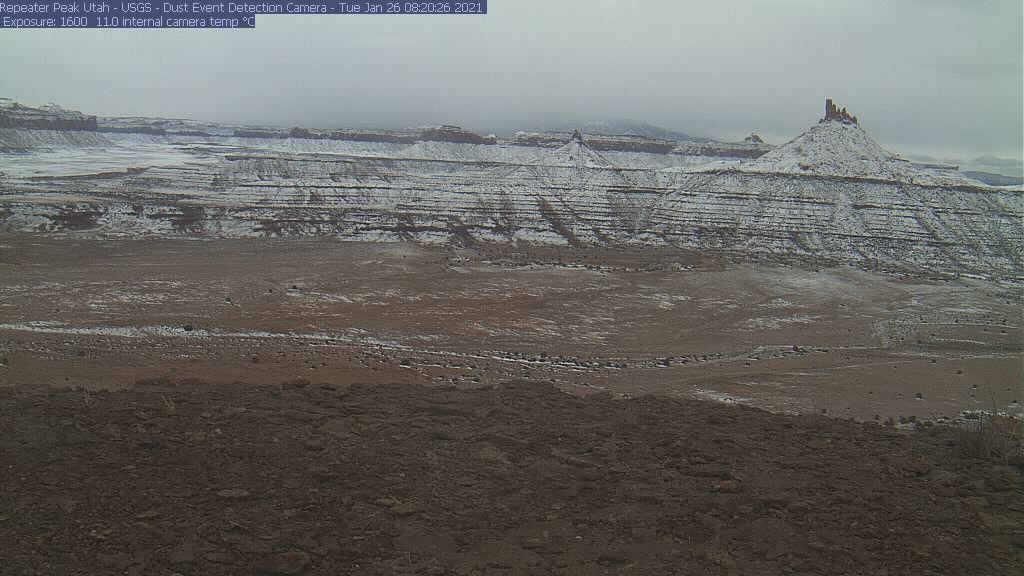 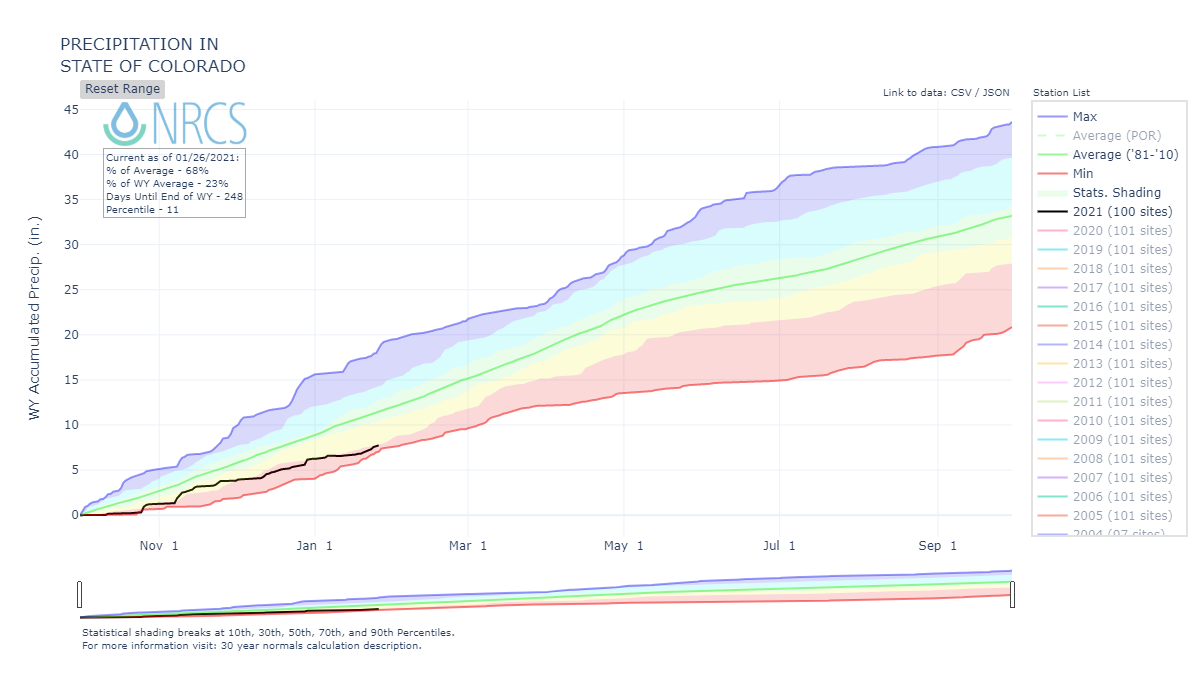 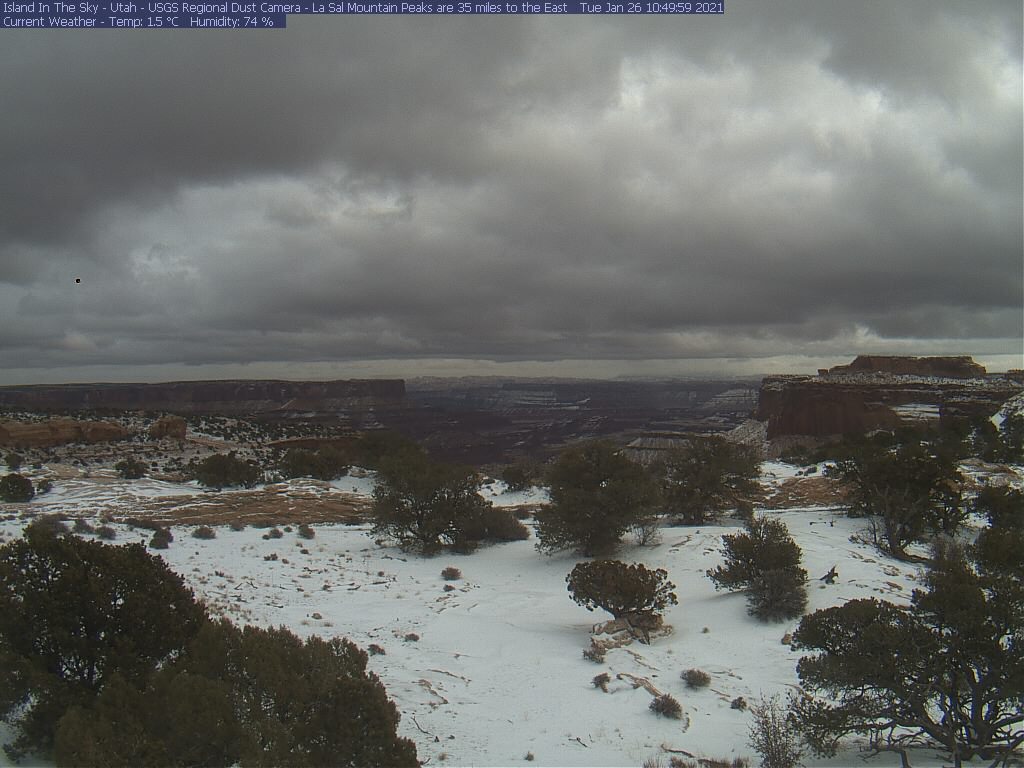 Finally, as a welcome reprieve from the ridge that has dominated most of winter, Southern Colorado received it’s first storm since the end of December occurring Friday (Jan 22) thru Saturday (Jan 23).  The welcome precipitation delivered 0.7″ precipitation at Swamp Angel near Red Mountain Pass.  The San Juan’s benefitted the most from this first wave in a wave of storms over the next few days.  Saturday afternoon was the calm period as another system entered our region from the south early Sunday morning (Jan 24).  Last night and today we chalked up another 0.47″ precip, making for 1.2″ precipitation since Friday.  Yet another system is expected to crank up out of the Four Corners Monday thru Tuesday.  And to keep things interesting the forecast is tracking another trough to arrive on Saturday.  Expect another storm report once this current system has exited to the east.  And hopefully another soon after that. 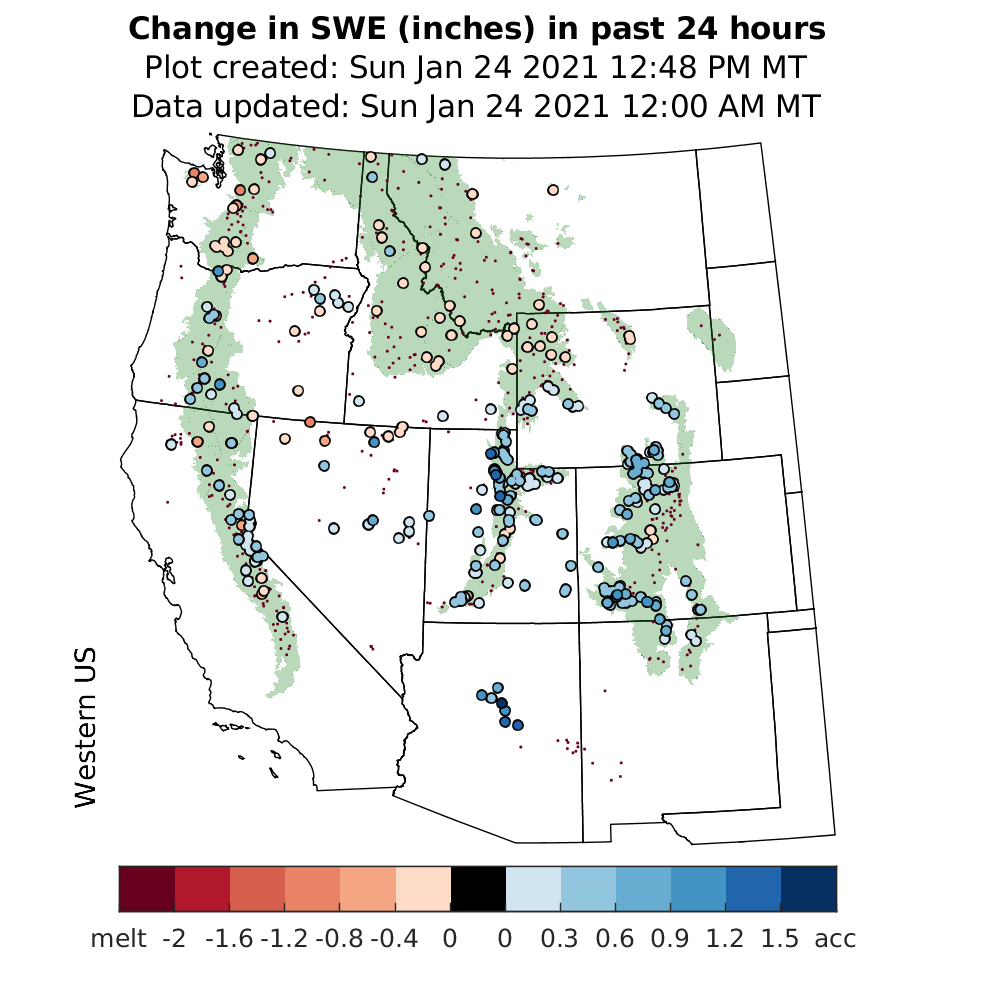 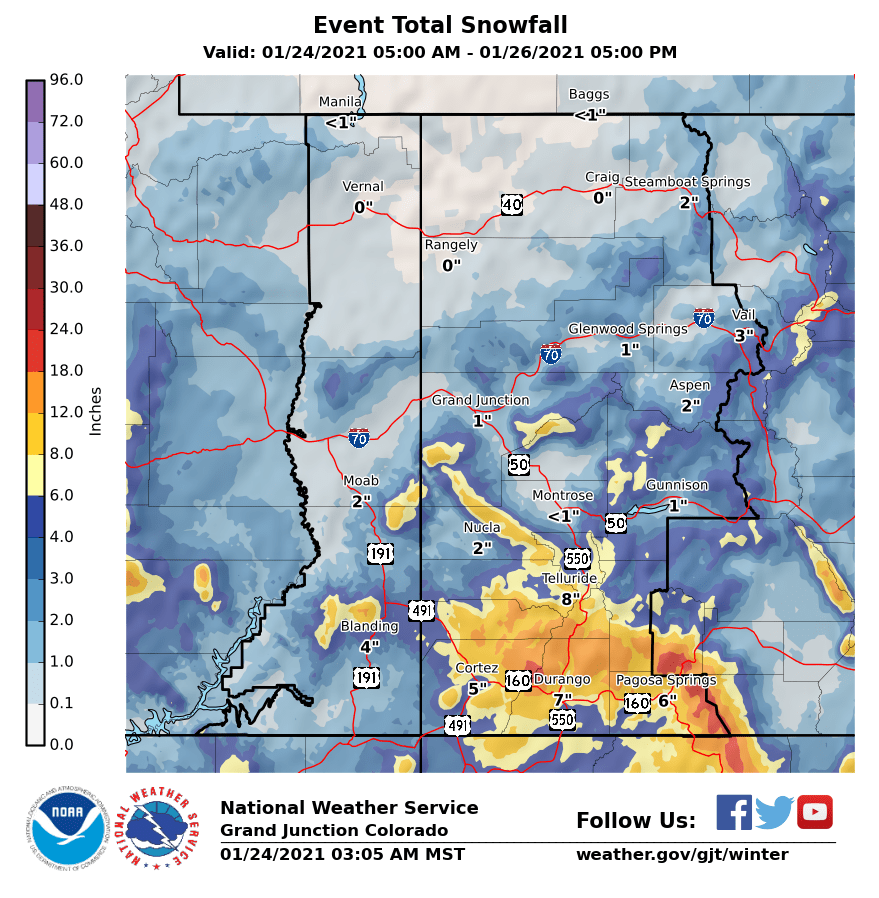 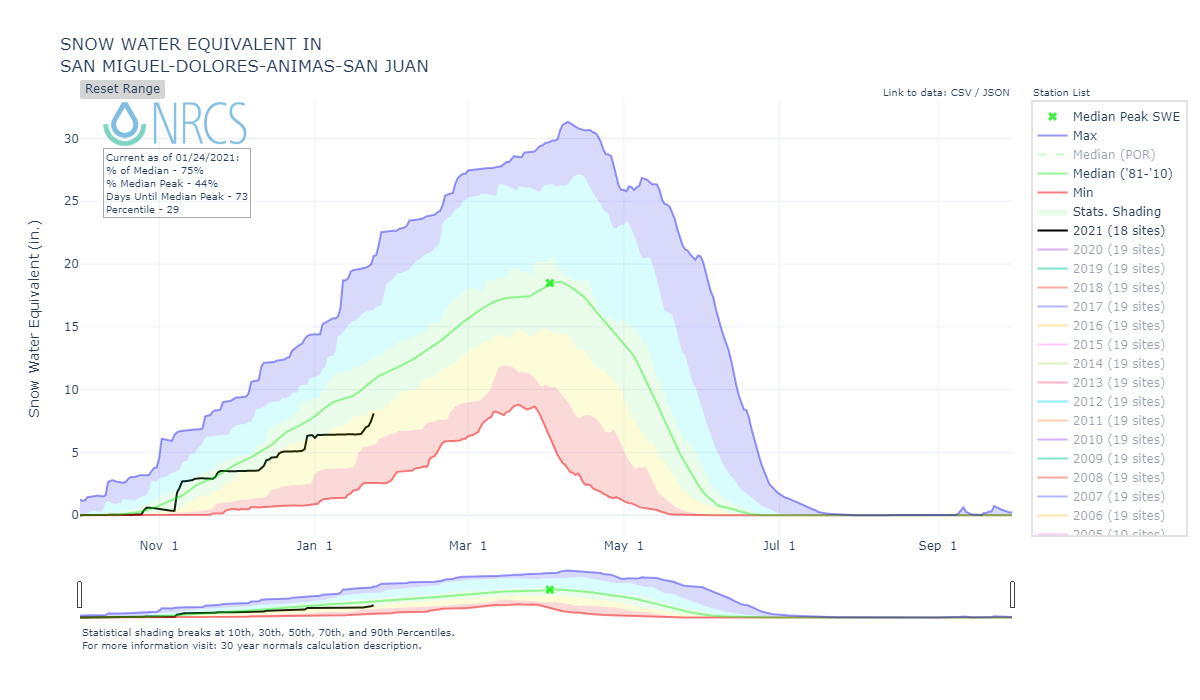 Storm Report Roundup, January 6, 2021: “Uneventful”, Word of the Winter Season So Far
Greetings from Silverton,
The winter season so far hasn’t been anything to get excited about from a winter storm and snowpack accumulation perspective.  Over the last few weeks we have received a number of precipitation events that did not achieve storm status and our last official storm was December 29th-30th, collectively has not been enough to keep the snowpack at most observing stations near average with most struggling a bit.  The two basins that are currently close to normal are the Upper Rio Grande and Arkansas.  The problem that is evolving is even if we receive normal precipitation amounts the remainder of the season it may still mean a below normal peak accumulation, just because of the catching up that is required.  Additionally dry soil conditions are expected to require a lot of water come springtime, taking more than the usual amount of it’s share of snowmelt.
View Storm #5 Details Here
La Nina conditions so far this winter have favored more northern areas of the western U.S.  With Colorado usually being in the transition zone with wetter conditions in northern Colorado and drier to the south, this year the delineation line has moved even farther north.  Fingers crossed for a more productive 2021, like a few atmospheric river events.
In terms of dust-in-snow the word “uneventful” is applicable but in a good way.  So far this season we have observed light dust from an early season storm and nothing else from recent activity.
More Soon
By the end of December we have received 5 winter storms (below) which is right around average, however the storms this season have all been average producers at best, hence at Senator Beck and many other areas, equates to a less than average snowpack. 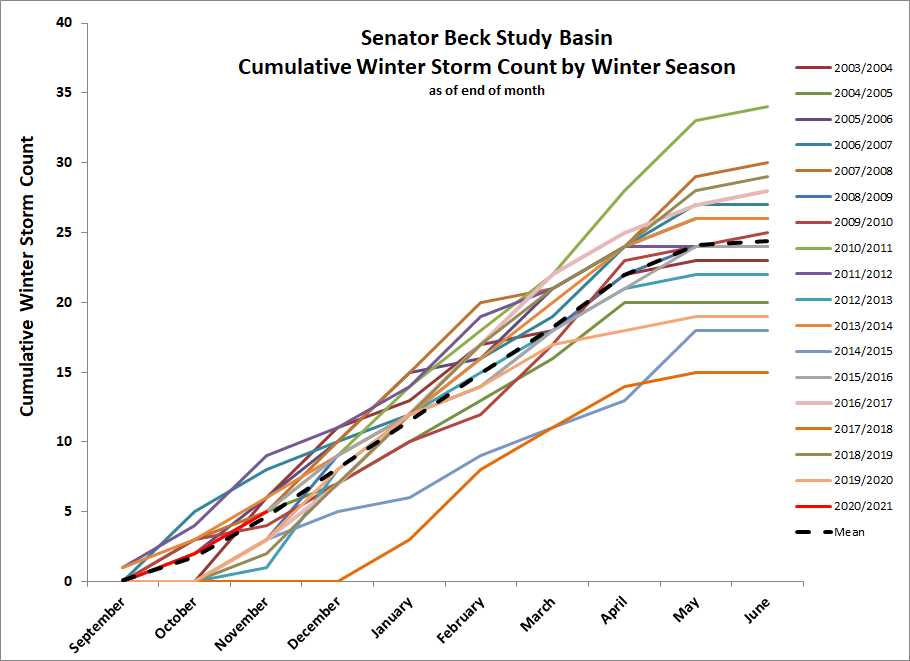 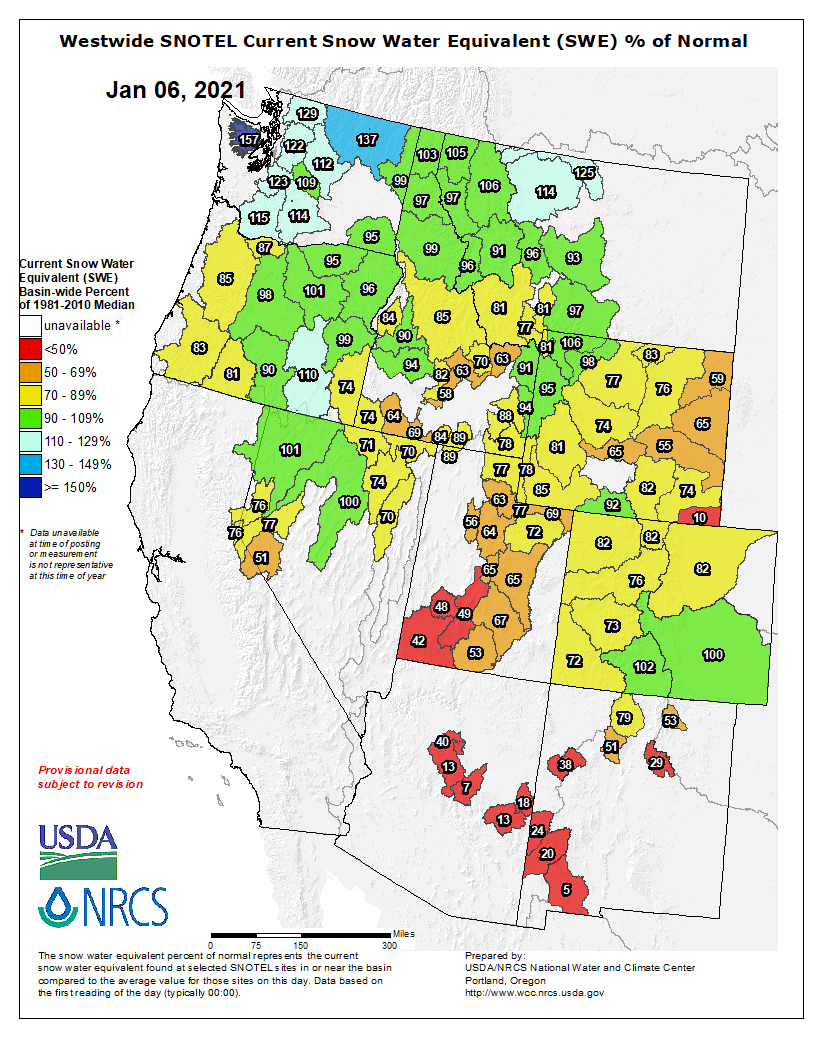 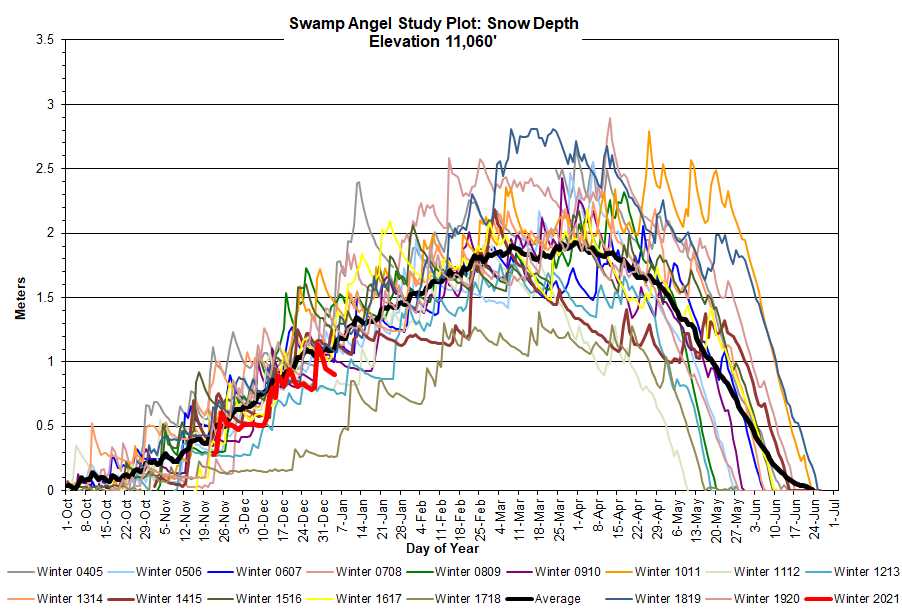 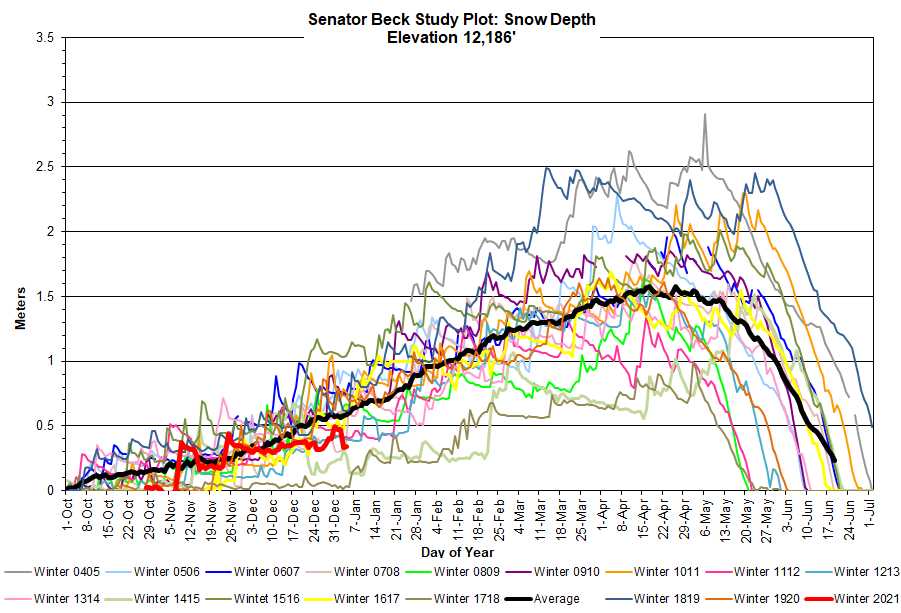 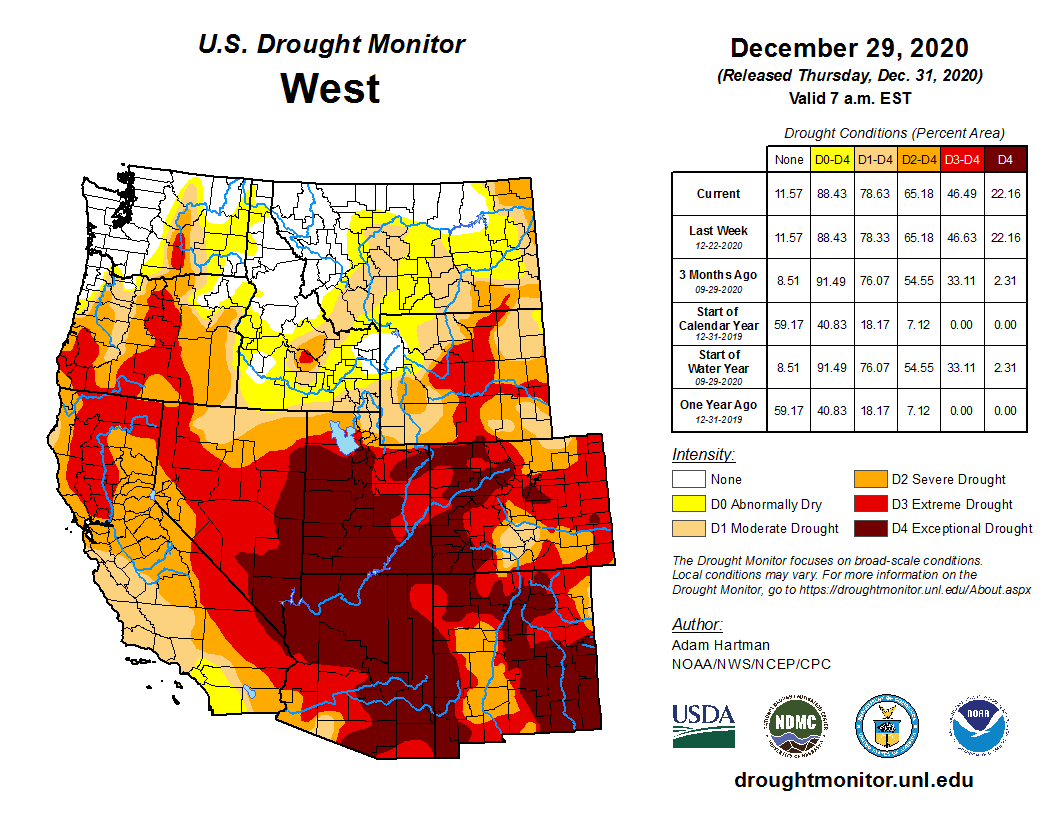 Storm Report #3 and #4, December 12, 2020: 1.2″ Precipitation Since Thursday
Thursday afternoon ushered in a break to the 14-day dry spell with storms that came through in a couple waves. The first bit came through over a 26 hour period amounting to 0.5” precipitation as 10” snow accumulation at Swamp Angel.  The second bit started up Saturday morning, lasted 18 hours, and also delivered 0.5” precipitation.  Consistent high winds (35-49 mph) moved the snow around as seen at the above treeline Senator Beck station where snow depth fluctuated a great deal.

Another system is currently working it’s way across the Four Corners region.  Since early this morning we have seen 1 mm/hour of precipitation and a few inches accumulation.  The NWS sees most mountain areas receiving 2-4” with a few locations seeing 6” accumulation by tomorrow morning. 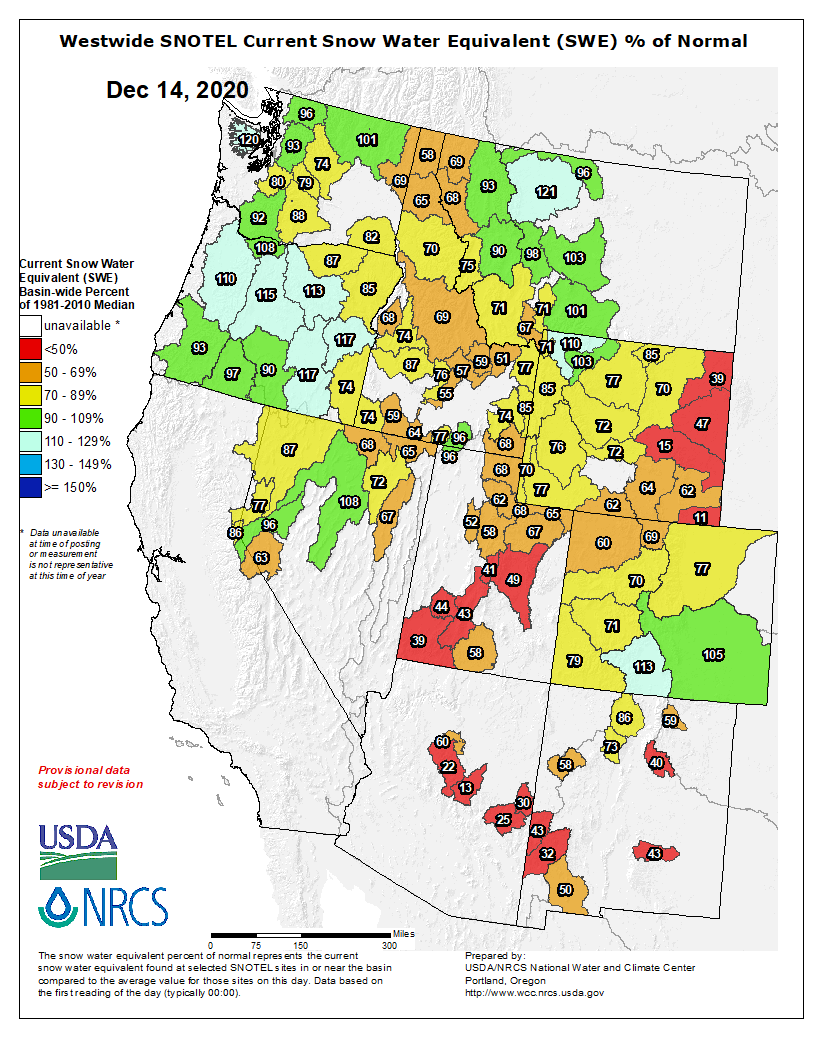 A 2-day storm moved through Colorado delivering a nice swath of snow from the southern San Juans to the Arapaho National Forest west of I-25.  Here at Red Mt Pass it was a little slow to arrive but eventually amounted to 1.1” precipitation with 12.9” snow accumulation.  West of highway 550 the San Miguel and Dolores basins benefitted the most with some areas approaching 3’ accumulation.  Ski resorts welcomed this boost in building the snowpack as well.  With ski season upon us make sure you check the avalanche forecast on the CAIC website before heading into the backcountry.  There is light precipitation in the forecast for the southern mountains and north/central mountains, but beyond that the outlook for the week is dry.

Have a safe and relaxing Thanksgiving weekend. 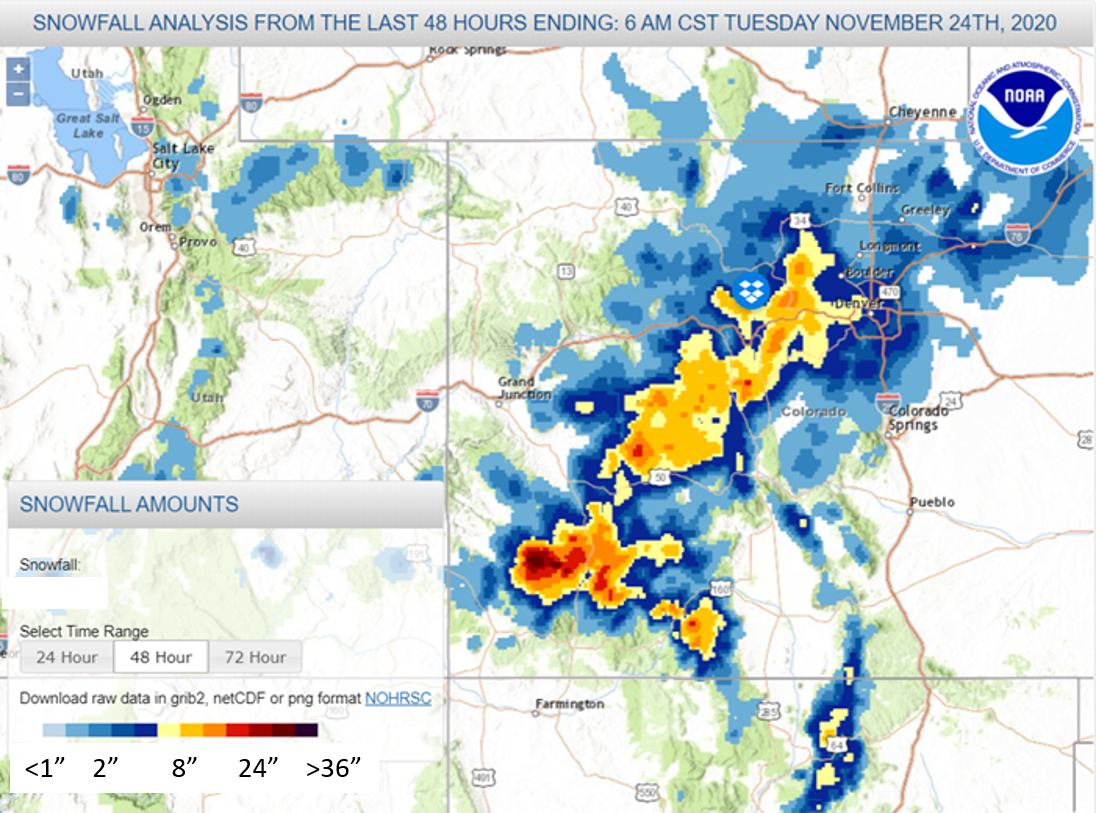 After a dreadfully hot and dry summer and autumn it was refreshing to see a big early season storm roll through the San Juans and central mountains in two waves starting early on Saturday, November 7 and diminishing Monday night.  Our first winter storm of the season occurred October 25-26 and brought 0.7” precipitation mostly in the form of snow at higher elevations but had largely diminished over the last couple weeks except for northerly slopes.  The October storm really helped get a handle on the Ice Fire just outside of Silverton and also brought the first dust-with-snow event of winter (we will cover that soon in a CODOS update).

We now have full snow cover in the San Juans with the November 7-9 storm delivering a welcome 3.1” of precipitation and approximately 30” of snow accumulation.  At the above treeline Senator Beck station we are seeing 16” snow depth.  Early on a good bit of the falling precip was likely rain but gradually turning to snow.  Wind gusts went over 100 mph early on as well. The central and southern mountains received mostly in the 12” – 24” range.  The big winner was the Southern San Juans, Wolf Creek SNOTEL now sits close to 3.5’ snow accumulation.  Last year at this time we did not begin to build the snowpack until the latter part of November.

The near-term forecast is calling for generally warmer and drier than normal conditions.  The current ENSO forecast is for moderate or possibly strong La Niña conditions through winter.  Below is what precipitation might lean towards around the globe. With Colorado sitting in the transition zone, La Niña can generally mean wetter and cooler towards Northern Colorado and dryer and warmer towards Southern Colorado.  Nothing is a given and hopefully this storm report is the first of many this winter. 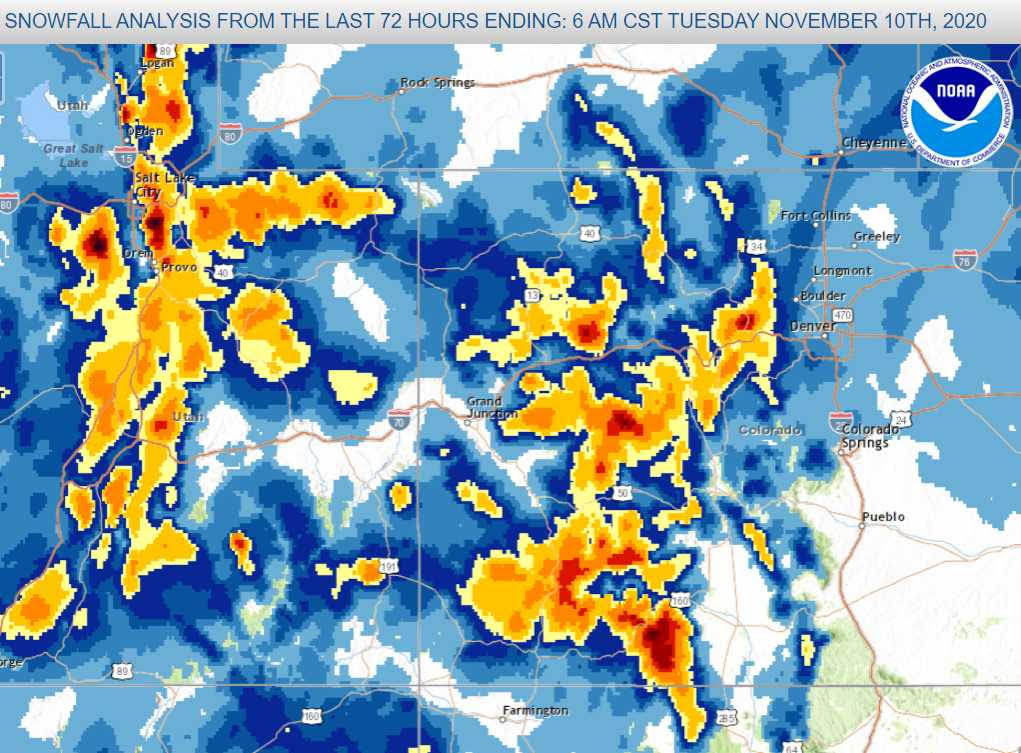 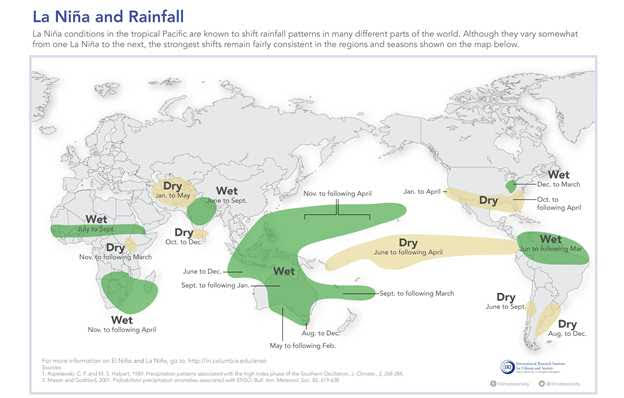