2019-2020 Winter Storm Reports
Storm #17, March 27-28:  A Windy Start to Weekend
Greetings from Silverton,
Another weekend storm hit Colorado Friday, March 27 to Saturday, March 28. SASP received 0.6” (14 mm) of precipitation as 7.6” of snow. This storm produced varied snowfall accumulations in the North San Juans with more snowfall being recorded to the west. At a Telluride Ski Resort weather station located at 10,950’, 6.5 miles west of SBB snowfall totals were about 14”; and a Mountain Studies Institute weather station in Cement Creek at 11,736”, 4 miles southeast of SBB, reported 0.4” (11mm) of precip and 4.3” of snow. Also of note is the extreme southwest wind which proceeded this storm. The CAIC Eagle Weather Station on Red Mountain Pass recorded a gust of 106 mph at 800 hrs MST on Thursday March 26, and average speeds between 20 and 60 mph during the 24 hours leading up to Storm #17.  Our Putney station on Red recorded a peak gust of 80 mph during the same period with average wind speeds of 35-50 mph.  So the wind was really getting after it on the leading edge of this storm.

Another series of storms, with periods of clear weather, are in the forecast for the San Juans this week. It does not look like these storms will produce enough precipitation to for a storm report – but we’ll see. The Northern Mountains look to benefit from a trough entering the region late Wednesday.  Over the next few days we will be out to SASP and SBSP to investigate the snowpack and get the stream gauge operating.  After these high winds, we would expect to find dust which we did not see on Saturday at SASP, but it might just take a day or two for the snowpack to consolidate making any dust deposition more obvious.

A series of two precipitation events passed through our region from Wednesday, March 18 to Sunday, March 22 producing 1.8″ (45 mm) of water at SASP and accumulating 13″ of snow. This new accumulation pushed the snow depth to over 6.6′ (2 meters) at SASP. The duo of storms had a slight break in precipitation during the evening of Friday, March 20, but precipitation began again for the weekend. The wet southwest flow contributed to a boost in SWE in the San Juans, and also brought snow to the Central and Northern Mountains of Colorado and to valleys throughout the Four Corners Area. Snowfall was seen across Colorado with a high accumulation of 27” on the Uncompahgre Plateau. Currently we are seeing SWE near to above average statewide.

Over the next couple days expect high SW winds ahead of an elongated trough crossing through the desert southwest Wednesday night thru Friday with good chances of more precipitation favoring Northern Colorado a bit more than Southern.
Storm Report Attached 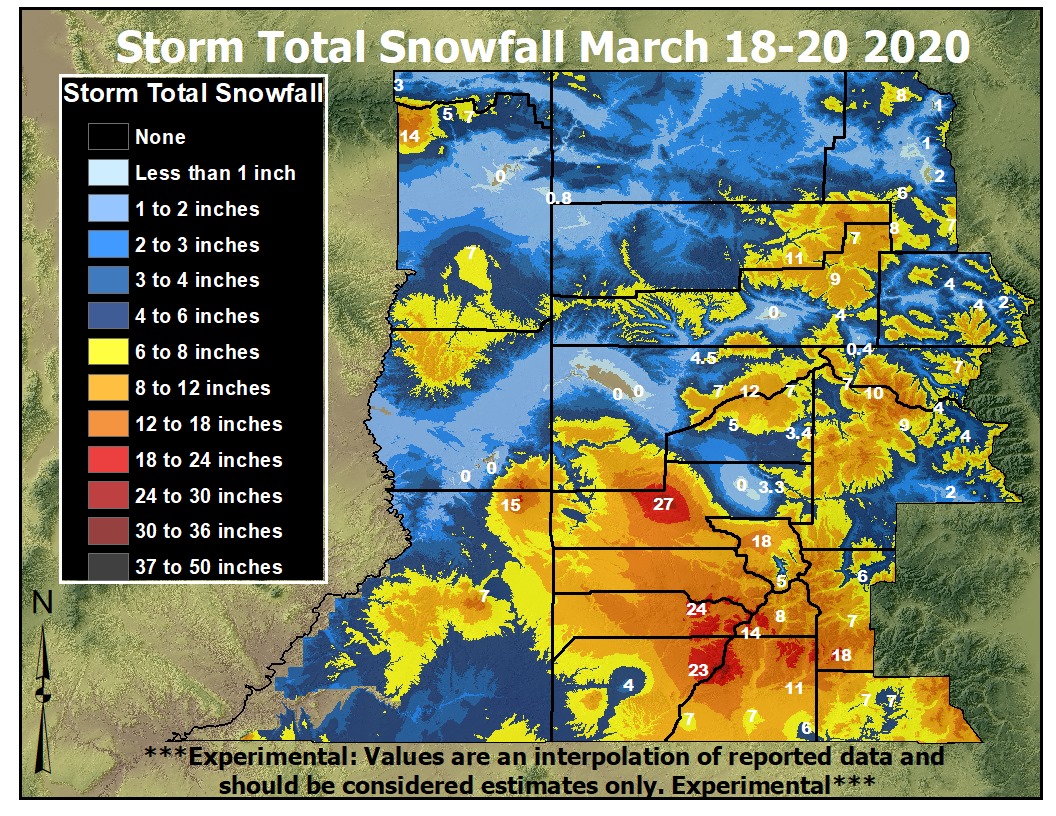 This past weekend began with a wet winter storm yielding 20mm (0.8”) at SASP over 31 hours.  It did not deliver the higher amounts that were forecasted in the mountains but did create a modest upward tick in basin SWE amounts nonetheless, something is better than nothing. This event also came with a strong southwest wind with an average speed of 21.2mph and a peak gust of 69mph.  We did not see dust from the storm as of yesterday (there was local debris on the snow surface) but that might change.  The forecast today and tomorrow is for windy conditions which could also bring dust.

After a breezy Monday and Tuesday the weather forecast looks promising for more precipitation Wednesday and Thursday, great to see more opportunities for snow.

The Senator Beck Study Basin received a 28-hour burst of winter weather over the weekend.  SASP picked up 15mm 0.6” of water and the height of snow increased 8.4”. This storm entered the region with a southwest flow; delivering more water to the southern portion of the San Juans than Senator Beck.  Storm #14 was the second storm of February, the first was Feb 6-7, and we did add 0.4″ precipitation Feb 16-17 but it fell short of storm status.  For the month we have received 3.4″ of precipitation.

We are expecting to receive more flurries Monday/Tuesday, but it is unlikely that it will be enough precipitation to warrant another storm report. As the weather clears in the next 24 hours it is going to be cold with low temperatures forecast to be around 0°F.
Storm Report #14 attached
February 6-7: Storm #13

A strong winter storm impacted the North San Juans February 6-7 2020 and elsewhere of course with the CDOT cameras showing major problems for travelers these last few days (but nice accumulations!). This event was consistent in delivering 1- 2mm of precipitation/hour over 45 hours producing 46 mm (1.8”) of water and an increase in snow depth of 47.5 cm (18.7”) at SASP. Storm #13 was associated with strong NW winds; as well as an atmospheric river event which produced winter storms from British Columbia to Colorado. This wet NW flow allowed Senator Beck to receive more precipitation than forecasted. Accumulation was lower in the South San Juans with snowfall totals generally around 18 cm (7”). The Wolf Creek Pass Snotel received 12.0mm (0.47”) of precipitation. Another round is forecasted starting today through Tuesday. Southern San Juans are expected to benefit moreso from this one.  Northwest flow sets up on Wednesday with additional quick moving storms coming through Colorado every few days.  We will update you once we have the totals.

Storm Report #13 Attached.
January 27: Storm #12
Greetings from Silverton,
It has been a busy week attending the Outdoor Retailer Show and Colorado Water Congress in Denver this week.  Finally I have a chance to issue a Storm Report for event #12 that occurred on January 27. Once again, like many precipitation events the past 4-5 weeks or so, this was barely considered a storm.  It delivered 12 mm (0.5″) precipitation amounting to 8″ new snow accumulation.  It began out of the southwest but towards the end swung around from the north.   Colorado is holding onto a median snowpack and it looks like the start of next week we will have a chance to add to it.  The NWS reports a strong atmospheric river will roll through the Pacific Northwest, it is expected that much of this moisture will get pushed off to our north, nonetheless all of Colorado is expected to see some snow Monday and Tuesday.  Chances of snow will persist the remainder of next week.  O, and cold, it’s gonna be cold.  Below is the 7-day precipitation map.
Yet another good article from the Colorado Sun about measuring snow and the uncertainty of what the future has in store for us:
https://coloradosun.com/2020/01/24/future-of-snow-science-lidar-water/
Hopefully another storm report will be issued soon.  Storm report #12 attached.
January 21-22: Storm #11
Greetings from Silverton,
On Thursday a 51 hour storm moved out of the North San Juans.  This system was slow and steady, delivering 1mm precip every hour or so for a total of 27 mm (1.1″) precipitation and 12″ new accumulation when it was all done.  This was a nice accumulation period compared to a few systems over the last few weeks that have delivered just shy enough precip to be considered a storm by our definition.  Colorado is holding onto a median snowpack or slightly better with the accumulation season about half over.
Heidi Steltzer, our Board member and very busy (last week she testified before the House Committee on Science, Space, and Technology) scientist at Fort Lewis College was featured in a Colorado Sun article about her research into how climate change will influence our mountain plant community.
Another interesting Colorado Sun article discusses how a warming climate will alter our snowpack.  The modeling approach they discuss, the Climate Model Intercomparison Project, includes data from Senator Beck Study Basin.
The final link illustrates how our snowpack is predicted to change over the next 60 years:
https://usfs.maps.arcgis.com/apps/MapSeries/index.html?appid=4d6e58342f5a451dbe9e9c946bf76f85
Storm Report Attached.
More soon
January 16-17:  CSAS Storm #10
Greetings from Silverton,
Over 26 hours ending on January 17 we received storm #10.  It was accompanied by pretty stiff winds for the duration of the storm with gusts as high as 73 mph.  Visibility was often very low with the blowing snow.
This was our first storm since January 2, but some weather systems have come through over the last couple weeks delivery ~2″ precip.  Still, so far this month we struggled a bit except for a few high mountain locales.  The snowpack is hanging in there with SWE in most major basins looking like the state-wide SWE plot below.   Forecasted precip over the next 7 days is not that exciting, looks like we get a chance this Tuesday going into Wednesday, benefiting Northern Colorado a bit more than the San Juans. 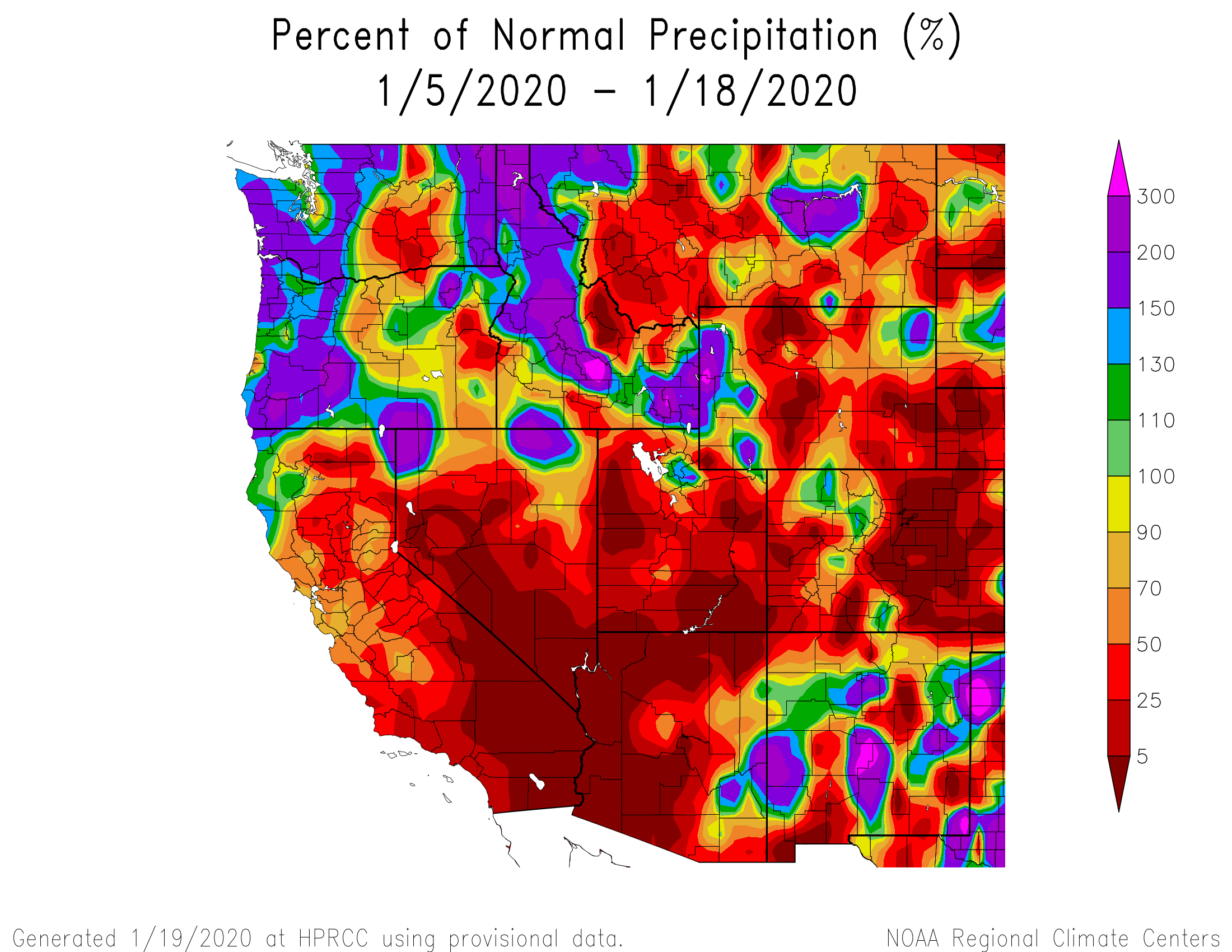 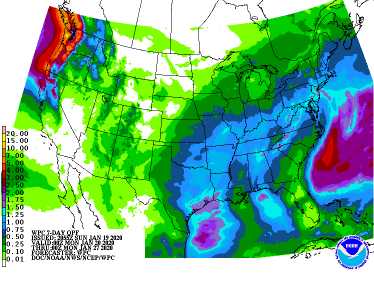 Storm Report #10
December 29 – January 2: CSAS Storm #8 and #9,
Greetings from Silverton,
A couple of short storm events rolled through the last few days.  The first Dec 29 – Dec 30, and the second Jan 1 – 2.  The latter storm was pretty wet and dense.  Stiff winds were out of the north for both storms, likely explaining why some stations just to the south did not receive near what we did at Swamp Angel.
We are doing a little over an inch better in terms of precipitation, and have received 2 storms more than the average, for this time of year.  Starting mid-week we will see a trough roll through with still a lot of uncertainty about the extent and severity of this system.  Keep your eyes on the forecast.
More Soon,
Storm Report #8
Storm Report #9
December 28: CSAS Winter Storm #6 and #7, 2.2″ Precipitation Since Christmas Eve
Greetings from Silverton,

I hope everyone had a great Christmas and been able to get out in the snow this week.  Since Christmas Eve Swamp Angel has received 2.2″ of precipitation and accumulated about a 1.5′ of snow over 2 storm events.  Storm #6, Dec. 24-25, brought close to an inch of precipitation while Storm #7, Dec 27-28, brought about the same with the remaining coming from a six hour period on the 26th.  Both storms were mainly out of the south with peak gusts hitting 58 mph on Friday.

The snowpack now sits at 4.4′ (1.34 meter).  Not bad, all major basins in Colorado are sitting at median SWE or better.

As storm #7 tapers off we will see mostly dry and cold conditions.  Temps are forecasted to stay 10-15 degrees below normal.  Northern and Central mountains will see a chance of precip Wednesday with the best chance on Thursday.  We’ll see another chance of precip on Sunday with Northern/Central Mountains looking to benefit the most.

Another productive storm just rolled through Colorado.  From December 13-16 at Senator Beck Basin on Red Mt Pass we received 1.2″ precipitation at Swamp Angel Study Area (11,060′) and snow accumulation gain of about 1′.  We have received 7.4″ of precipitation since the start of snow season which began the last few days of October but did not start amounting to anything until the November 20 storm.  For the water year we are very near average precipitation thus far (9″ vs 9.4″ average).  The SNOTEL Basin precipitation plots are showing similar information.  A good start to the winter, compared to last year you may recall Southern Colorado struggled through Christmas with 2/3 normal snowpack, but came back with a vengeance starting January onward.  Its nice not playing catch up so far.
Storm reports 1-5 are now posted to our snowstudies.org website.  The plan is to issue storm report email updates for the duration of the snow season when we receive at least 12 mm precipitation with no break in precipitation greater than 12 hours.  If you would like to also receive our dust-on-snow email updates please let me know.
If you don’t subscribe to our dust-on-snow email notifications I would like to make you aware that our “Snow School for Water Professionals” class will be held February 19-21.  This a combination classroom/field learning class designed for folks wanting to learn more about the role of snow in our mountain environments as it pertains to water resources.  Please see the attached flyer for more information and don’t hesitate to contact me with any questions.