CSAS has contracted with the Colorado Natural Heritage Program to perform repeat surveys of the Senator Beck Basin vascular plant communities every 5 years.   Plant communities are a significant factor in understanding snowcover distribution and water utilization in mountain systems.  Altogether, twenty-three 100′ transects are monitored, in 230 micro-plots, at three general elevations – twelve in the alpine tundra, six at/near treeline, and the remaining five in the subalpine.  This map (USGS “Ironton, Colo” quadrangle) indicates the location of the southern (or eastern) end-point of each of the twenty-three 100′ transects.  Survey monuments were placed at each end-point of each transect to facilitate repeat studies.

The original baseline study was conducted during the summer of 2004, was repeated in 2009, and repeated again in 2014. The complete 5-year repeat 2009 report (pdf) and original 2004 Species List(xls) are available for download and a new report including 2014 data will be forthcoming.  More photos and details can be found on our July 2009 news update page and our summer 2014 news. 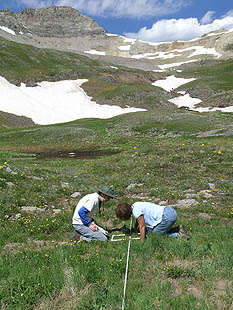 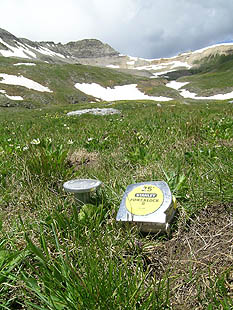 Forest Health
Lower Senator Beck Basin contains many acres of sub-alpine ‘spruce/fir’ forest cover.  These trees are representative of the ‘spruce/fir’ forest type found throughout the San Juan Mountains and in other Colorado mountain ranges.  Recent severe ‘spruce beetle’ infestations in the San Juan Mountains have caused massive die-off and enabled large forest fires.  In the fall of 2014 CSAS contracted graduate student David Scott, from Colorado State University, to extend his recent surveys of forest health elsewhere in the San Juan Mountains to include an assessment of conditions in lower Senator Beck Basin.  Our intent was to capture baseline data while the forest was, apparently, still relatively healthy, prior to any significant spruce beetle infestation in this watershed.  His work did, in fact, find a relatively healthy spruce/fir system and revealed interesting findings about critical parameters driving forest conditions.  His report to CSAS is available here:  (SBB_TreeVigor_2013_Dks_Final20140820.pdf)